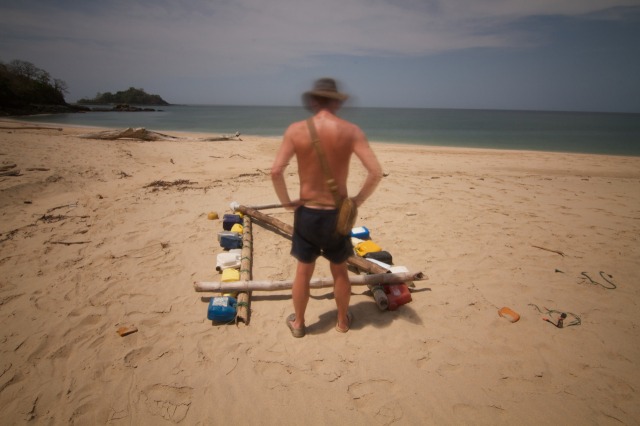 I have to say that one of my disappointments from The Island was seeing no more than about 15 seconds of footage, featuring Sam Nightingale and I rowing the raft out to sea in our (ultimately fruitless) quest for lobster.

Disappointing because the nets for the lobster pots (a.k.a. washed up drinks crates) took Sam and I two full days to weave and construct, then the raft itself was a 3-day hard-labour of love in 100 degree heat.

Of course, it is for the TV company to decide what makes the cut – and the viewing figures proved them right.

What I will cherish is the memory of putting the raft on the water for the first time, clambering aboard and rowing like fury with improvised oars (bamboo). We half-expected to sink without trace and there were cheers from the beach and high-fives on the vessel as we made our way slowly out into the bay and picked a spot over by the rocks on the left of the photo, to drop the pots with make-shift buoys to mark their position.

Three days we rowed back out and three times we pulled up empty pots – but at least we had a go.

On The Island we had no timepieces – and so gradually moved into a routine that was governed by two cycles:

Daybreak was around 06:00 and the older members of the party were always to be seen pottering about the beach first thing. In my own case frequently taking a morning dip in the ocean and washing the dirt and sand from the clothes I had worn in my forest bed the previous night.

Not everyone was so sprightly and often the first camp meeting to decide on the day’s action plan didn’t begin until 10:00, leaving just a couple of hours before the mid-day sun, which made activity very difficult.

So many of my mornings were invested in foraging, personal hygiene (such as it was), specific jobs like net and raft building – or helping the fishing team to pull the nets out and untangle whatever was in there, edible or not.

The tides dictated when we put the nets in and out of the water and as much of our staple diet was fish in the second half of the month, our meal times were equally governed by the 20 foot differential in the sea level.

From noon to about 16:00 the heat was a challenge and many afternoons were spent either sat around the camp fire waiting for fish to cook – or just asleep back in the forest and waiting for the temperature to fall.

Then, from 16:00 to 18:00, a couple of hours of work, before sunset and the return to full clothing as protection from sand flies and other critters of the night.

Typically, I was climbing back into my arboreal bunk bed by no later than 21:00.

In fact, looking back, I had more sleep on The Island than at any time since I was a schoolboy!

One of my favourite moments of the day was the last 45 minutes before sunset, when I developed the habit of dropping my sound pack over a tree branch and walking slowly the length of our beach (about 30 minutes each way) to the sculptures that Kiff had built (a collection of wood and other bits of nature that were fashioned into the equivalent of a Japanese garden) – there to sit and watch the most beautiful sunsets, alone and thinking as the pelicans plunged for their last meals of the day and shoals of silver fish leapt into the air and circled beneath the waves until the sea water became a foamy whirlpool.

Those sunset walks were moments that I will vividly recall for the rest of my life – the ultimate Zen.

Building rafts, weaving nets, gutting fish, building the camp, walking to and from the water supply, foraging across the island – all of these activities passed the time and engaged us to the extent that we were never bored.

But the silent moments of contemplation before the magnificent beauty of nature evoke the emotions that will linger on – and hauntingly call us back to a feeling of complete peace and freedom.