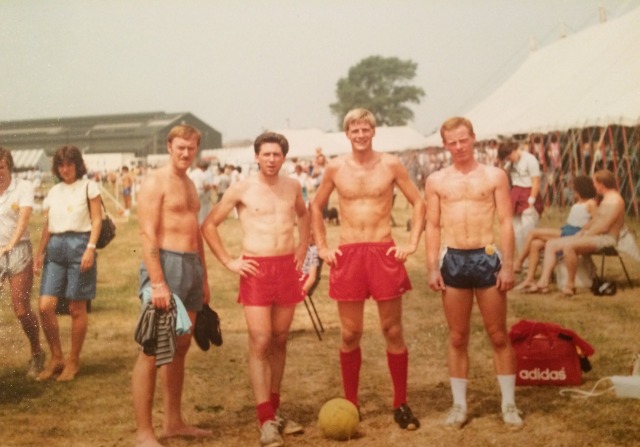 Check out the shorts!

Summer 1984 (I think) and we are in sunny Swindon, Wiltshire for the Hambro Life Assurance annual 5-a-side football tournament, with teams from branches of the company all over the UK.

Next to me is my then manager Gabriel (Gabs) Crayford and fellow broker consultant Andy Lee – I simply cannot remember the name of the 4th person in the line up (Phil?).

Note that I don’t have a hair out of place 😉

Due to a mix up, we arrived without our football strip and managed to borrow some shirts that were the Argentinian national colours.

So soon after The Falklands, we were booed through every game we played and the referees allowed us to get kicked black and blue.

I seem to recall us making the final stages of the competition, only to be beaten on a penalty-shoot out after I missed my shot (to the delight of those watching) – an early encouragement to pursue fewer team sports and concentrate on my solo career (although my first marathon was still 13 years away).

Having said that, it was shortly after this that I began 10 years of weekly volleyball – even now the most enjoyable team event I ever took part in.

Back to the photo – not sure what became of Gabs (Facebook help here?) but I see Andy now and then and enjoyed a good old chat with him and his daughter (who run an independent financial planning practice together) during a train journey from Euston to Wilmslow a few months ago.

I was between marriages 1 and 2 at this time and Gabs and his wife Barbara even invited me on holiday to Spain with them and his brother – a random act of managerial kindness I will always be grateful for, much to eat and drink on the beach and some excellent days playing tennis until we dropped.