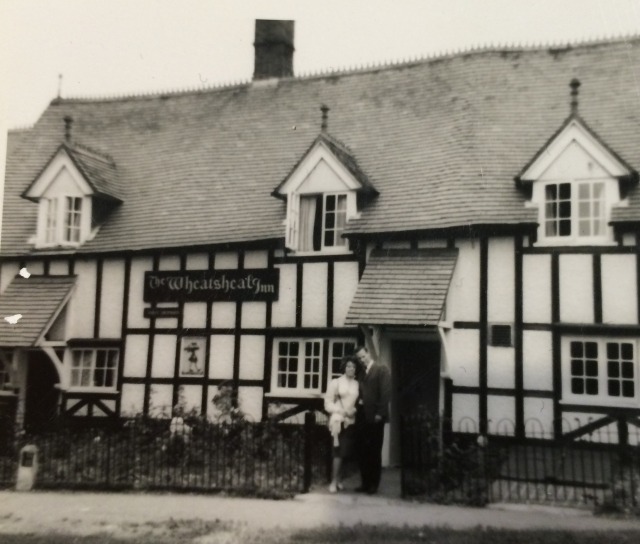 The Wheatsheaf Inn, East Hendred, Oxfordshire was owned for 3 generations by the Mulford family, related by marriage to my paternal grandmother May Barrow (before marriage her name was May Day!).

The Mulford family were very close to Joshua and May Barrow and could well have offered a port in a storm when Joshua took May as his wife, along with her baby daughter, born out of wedlock to a travelling salesman who just kept travelling.

My Dad didn’t know that his elder sister Dolly was, in reality, a half-sister, until 1968 when Joshua died and May revealed the “secret” to her 4 other children and the rest of the family. I remember well the day that the revelation was made at our family dinner table and the look of complete astonishment on my parent’s faces.

May smiled a sardonic smile as she told the story of her earlier life for the first time.

Having said that, her facial expressions were always unusual because she suffered from a permanent twitch in her right eye, the result of an unfortunate encounter with a pet budgerigar in the 50’s (you couldn’t write that as a script and get away with it could you?). So as she spoke to us the right side of her face was constantly animated as her eye twitched open and closed and her cheek lifted up and down like a mad version of the Popeye cartoons we loved.

Back to The Wheatsheaf – here, Norma and Charlie are on a return visit in the early 60’s (I suspect I took the photo on a Box Brownie) to the place that my Dad was evacuated to from Manchester at the beginning of the WW2.

Charlie would have been about 12 years old at the outbreak of war, Norma 10. When the bombs started to drop, he was lucky to travel south and stay with relatives in an idyllic English village. He told us of long hot summers spent wandering the lanes around this beautiful area.

She and her elder brother William weren’t so lucky and boarded a train to Blackpool where they lodged with a variety of stern sea-side landladies until it was safe to go home.

We tend to forget nowadays how traumatic it must have been for those working class children who were simply packed up and transported off to places they had never heard of, to live with adults they didn’t know.

Before I was born, the relationship with The Mulfords was closer and members of the Northern tribe would regularly travel down and stay over (the beer may have had something to do with it).

I was lucky enough to visit The Wheatsheaf a couple of times as a child – I remember an orchard behind the pub, sleeping under exposed beams and retracing my father’s long childhood walks with him. I also remember an impressive Manor House and a home that was lived in by Cabinet Minister Roy Jenkins.

The Wheatsheaf is still an active public house and the village is now a very desirable location for the rich: