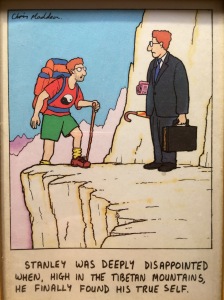 Back in the early days of my temporary TV celebrity status (May 2014 to be precise) I was chatting to my business partner Tim Caudrelier in the Radisson Blu Hotel, Manchester Airport, when I noticed a nearby guest giving me a funny look.

I discovered over the following weeks that the facial expression catching my attention was “OMG he’s that bloke off the Bear Grylls programme on the telly” – soon to become a regular and, frankly, enjoyable feature of my business travel.

The ultimate resignation to my fate came when a lady asked me in Altrincham Market who I was because she thought she recognised me and, on being told I was an Island survivor responded that she didn’t watch TV and thought I was one of the stall-holders.

Time to wind your ego back in CB.

Back in the Radisson, Sandy Sanderson was my first and I’m fortunate that his next action was to walk over to us, apologise for the interruption and ask for a selfie as well as a chat.

The conversation revealed that Sandy is a passionate crypto-zoologist.

Cryptozoology is a pseudoscience involving the search for animals whose existence has not been proven due to the lack of evidence.

Intrigued and slightly concerned that I might have met UFO chaser who wanted to show me his collection of teddy’s, I listened as Sandy told me something about his adventures.

The more I listened the more I liked him and became fascinated by his story.

We agreed to meet again some weeks later and so began a mutual respect and friendship.

Through Sandy I met Tino Solomon, a London doctor who loves to assist extreme expeditions all over the world.

We met face to face for the first time a few days ago and although cappuccino at the Hilton Paddington might not quite be a test of compatibility under stress in a rain forest, the meeting went well and we are making plans.

We have a couple of ideas floating around at the moment:

A question I’ve asked myself is what I’m doing in this intrepid trinity?

CB – 28 days on a tropical island during which I claim the fame for hand-crafting two lobster nets and a viable sea-going raft made of bamboo and plastic cans (clearly useful in the foothills of the Himalaya). Good at public speaking, blogging and coaching. Loves karaoke.

Strikes me that not many of my unique abilities will come in handy if we are deep inside a high-altitude forest, hungry, dehydrated, confronting a secretive and massively pissed off bear.

“stand back boys – hand me some Magic Whiteboard and a flip-chart pen!”

Consequently, I’m very honoured that the guys are welcoming me into the fold (we expect there to be 6 expeditioners on the trip).

You may at this point be wondering what it was about losing 15kg in body weight, enduring early-stage malnutrition and having constipation for a week that was so attractive I want to recreate the conditions?

Especially when I share a wonderful life with a perfectly imperfect woman who ticks all the boxes (and whose response to my “I’m going again” is “you crack on love”)?

We are not going to be on the telly – its not the ego.

It is a bucket list thing – great places to visit before I die.

There will be adventure, undiscovered animals or not.

Challenges will include the environment, the climate, the creepy crawlies (I haven’t told the boys about my girlie scream yet), the living rough and the need for us to get along.

Most of all it’s the “off the grid” aspect that I find addictive enough to suffer the pain.

OTG in the Gulf of Panama was, without doubt, the most spiritual event of my life.

I left a workaholic back on that beach and the CB that came home was and is a much nicer and happier person – enjoying the peace of mind of which I have spoken.

I row my boat gently up the stream nowadays, merrily enjoying the dream.

This new adventure will be different.

Memories that will inspire another series of blog posts – my very own footprints in the sand.

An opportunity to do some more work on evolving my soul.

This entry was posted in Happiness, Travel. Bookmark the permalink.